Steak. For many men, it’s their favorite meal, a treat at a restaurant, or a point of pride in their home cooking repertoire. It’s such an important food in many cultures that entire restaurants are dedicated to perfecting it, and the definition of the perfect types of steak is hotly debated.

Even though it’s a deceptively simple dish, requiring only a bit of seasoning and some heat, there are many things to know about steak before you get started grilling, searing or ordering one. Therefore, this article will discuss what exactly a steak is, the characteristics of a good one, and the best cuts to buy.

It may seem like an overly simplistic question, but there is, in fact, a bit of nuance to it. After all, not just any piece of meat is automatically considered a steak. The actual definition, then, is as follows: a cut of meat, usually beef, that’s sliced perpendicular to the muscle fibers. While this definition can apply to other types of meat, this particular series of articles will focus specifically on beef steaks, a staple in western cultures. 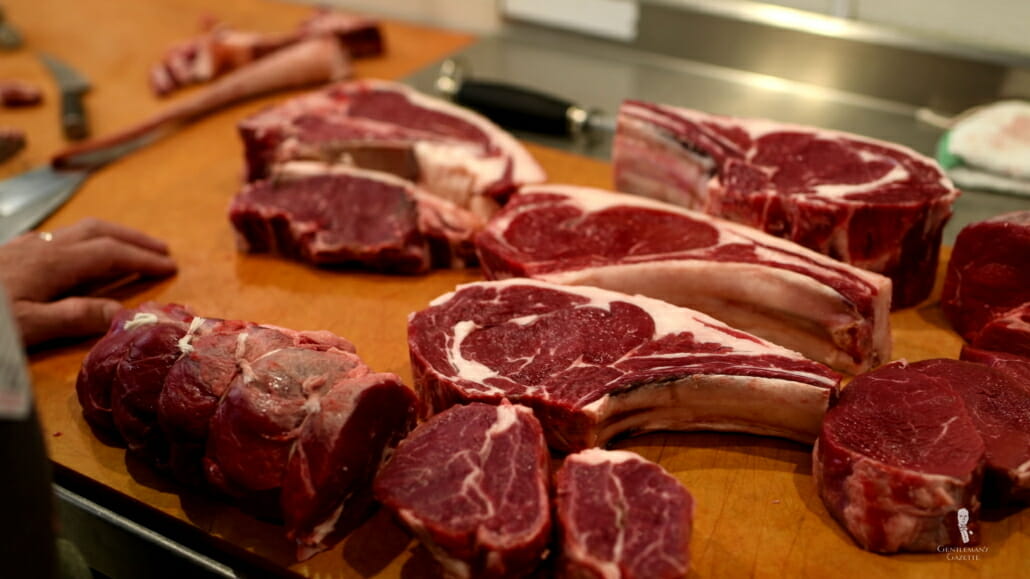 Assortment of different types of steak and cuts at the butcher

Before we go any further with specific information, there are a few important considerations that we feel obligated to address.

While many attempts have been made to reframe red meat as healthy (such as the “paleo diet” or advocacy of eating grass-fed beef) it simply isn’t. Ultimately, everyone must choose for themselves if or how they consume red meat. 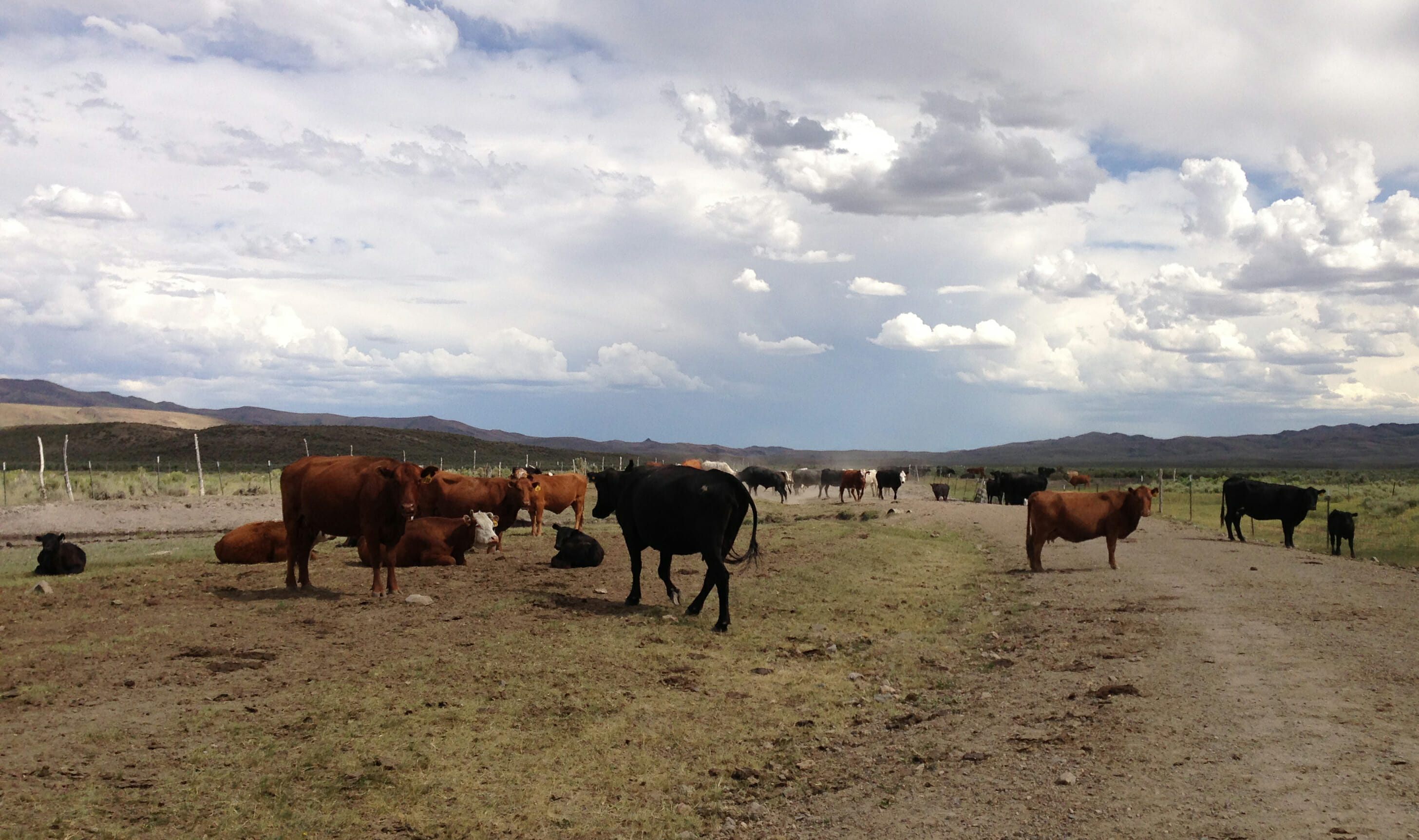 Cattle on a ranch near Elko, Nevada, USA.

Characteristics of a Great Steak

Now that we’ve covered our necessary disclaimers, let’s get back to discussing the particulars of what makes for a good steak. Overall, there are two key characteristics of a steak to consider: tenderness and flavor.

What Makes a Steak Tender?

The importance of tenderness can’t be underestimated; “tenderizing” a steak is a popular search topic for that reason. Tender types of steak are easy and enjoyable to chew. Nobody’s idea of a good steak should include a dining experience that resembles chewing on a piece of leather! With that in mind, the simplest way to achieve a tender steak is to start with a tender cut of beef because not all types of steak are created equal when it comes to tenderness, no matter how you cook your steak or how long it has been aged.

When considering tenderness, let’s look at the characteristics of the steak itself and set aside the cooking method for later consideration (which is to say, the second article in this series). There are two key considerations when it comes to tenderness: To summarize, the most tender types of steak will come from around the backbone, has very little connective tissue, and has finely marbled fat. For these reasons, as well as the fact that the more tender muscles are often smaller, you can expect to pay more for a tender types of steaks.

What makes a steak flavorful?

Again, let’s just consider the flavor of the steak itself rather than any seasonings that might be added during or before cooking.

The main components that contribute to flavor are the amount of fat in the meat, the diet of the animal it came from, and how the meat has been aged. 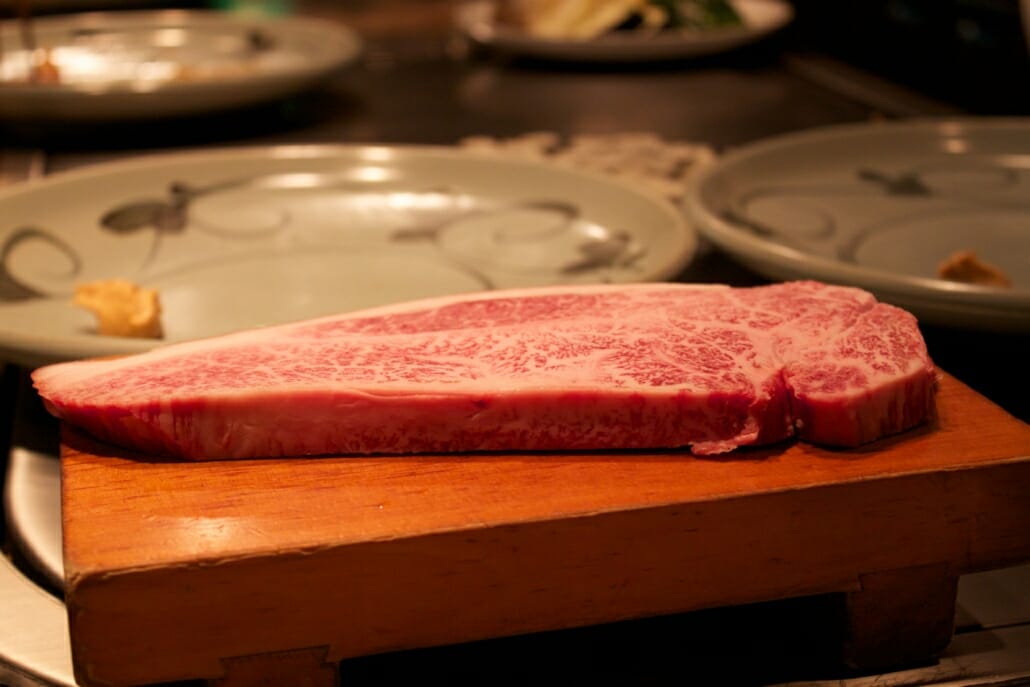 A cut of beef such as the one pictured here, with little connective tissue and finely marbled fat, will be more tender and flavorful.

A helpful infographic, illustrating the differences between grass-fed and grain-fed beef. 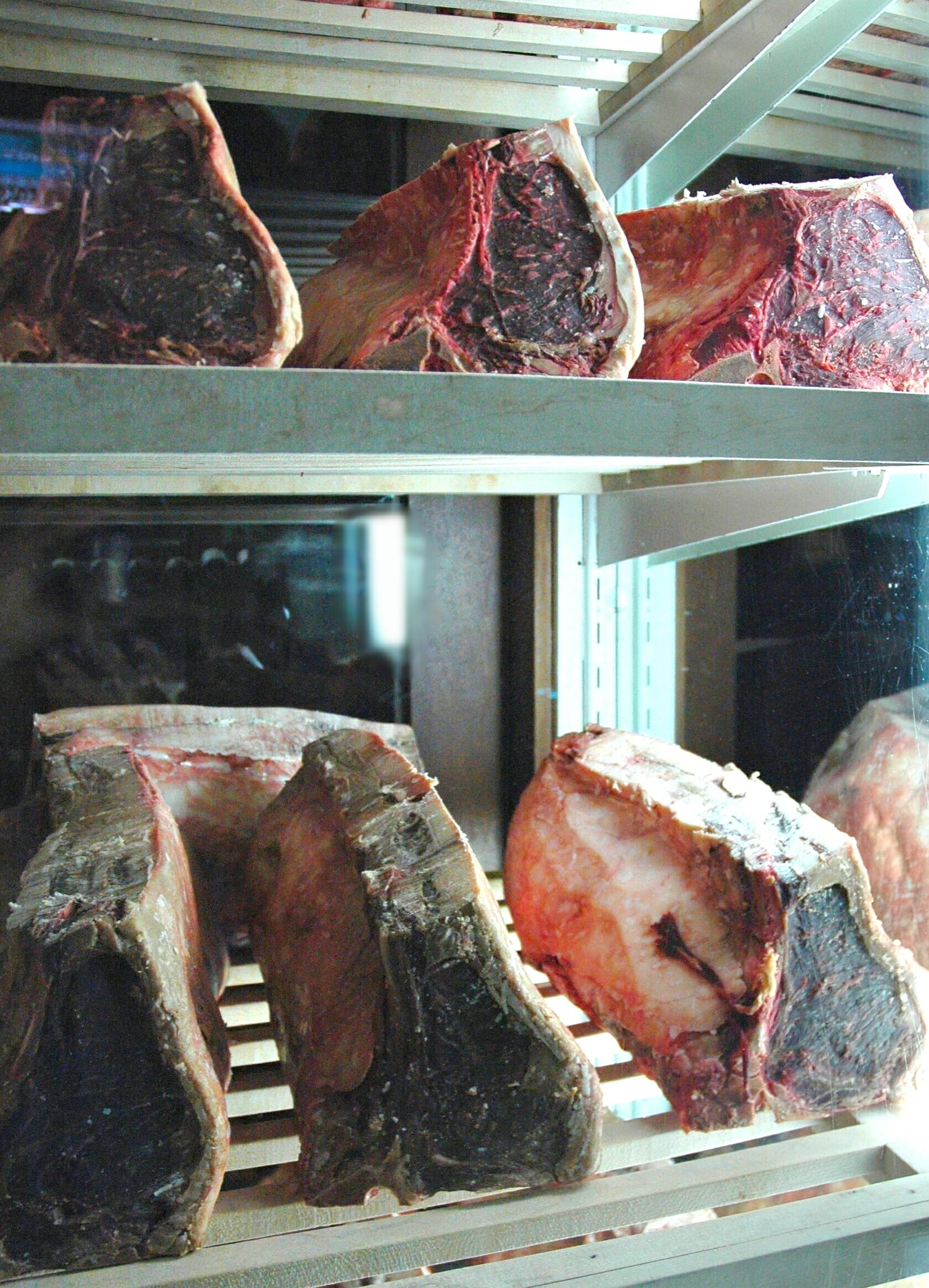 A selection of dry-aged cuts of beef. Note the dark and textured exterior. A typical example of a wet-aged steak, with moderate marbling.

There are many types of steak cuts; in simplest terms, a “cut” refers to the part of the cow from which the steak was sourced. The most tender cuts come from the loin and rib around the backbone, and as they typically have the best texture and flavor, these are the cuts on which we’ll be focusing today. We believe the top five cuts for tenderness and flavor are:

While they are all worth eating, a great many people will likely attest that the best combination of flavor and tenderness comes from the first three cuts on this list in particular. Of course, you might also enjoy other cuts (for example, a flank or flat-iron steak), but as we believe that the five cuts listed here represent the best combination of texture and flavor, they’ll remain the focus of our discussion. Now, let’s talk about each one. Another useful infographic, illustrating the numerous cuts of beef that are commercially available. 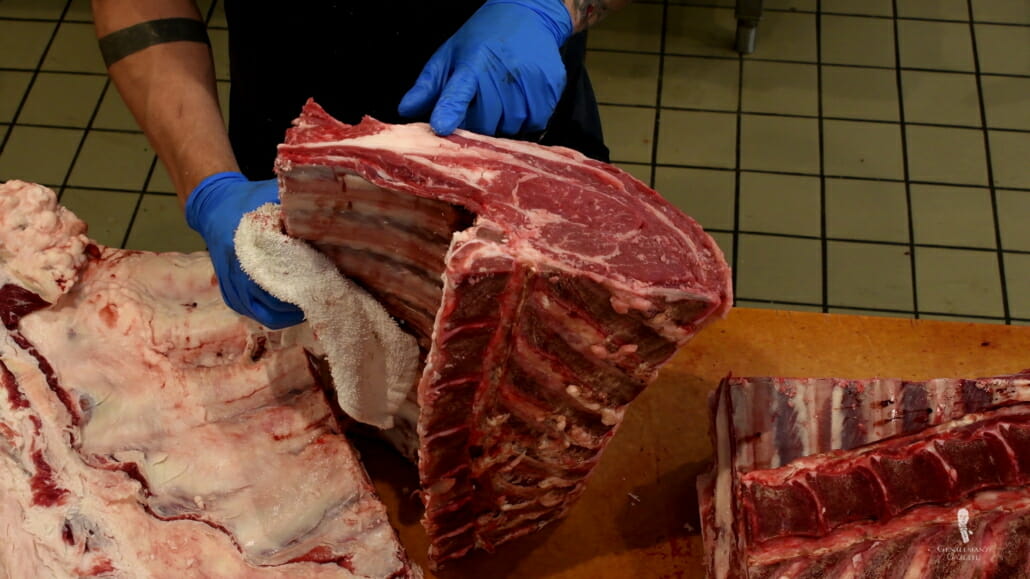 Rib Steak Ready To Be Cut, without the bone it is a ribeye – notice the marbling 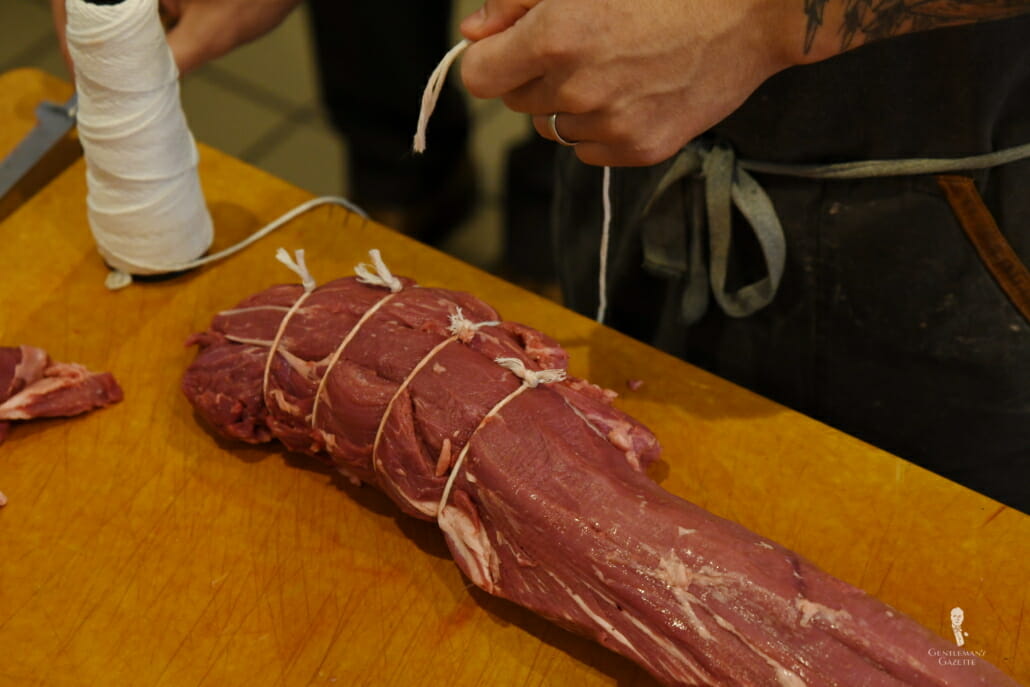 The Chateau Briand is the center cut of the Tenderloin 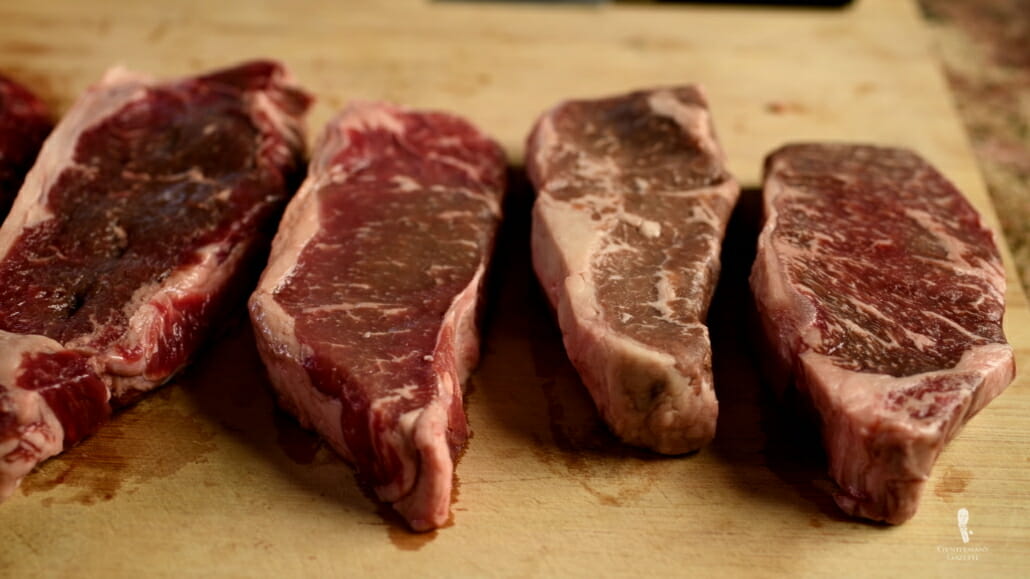 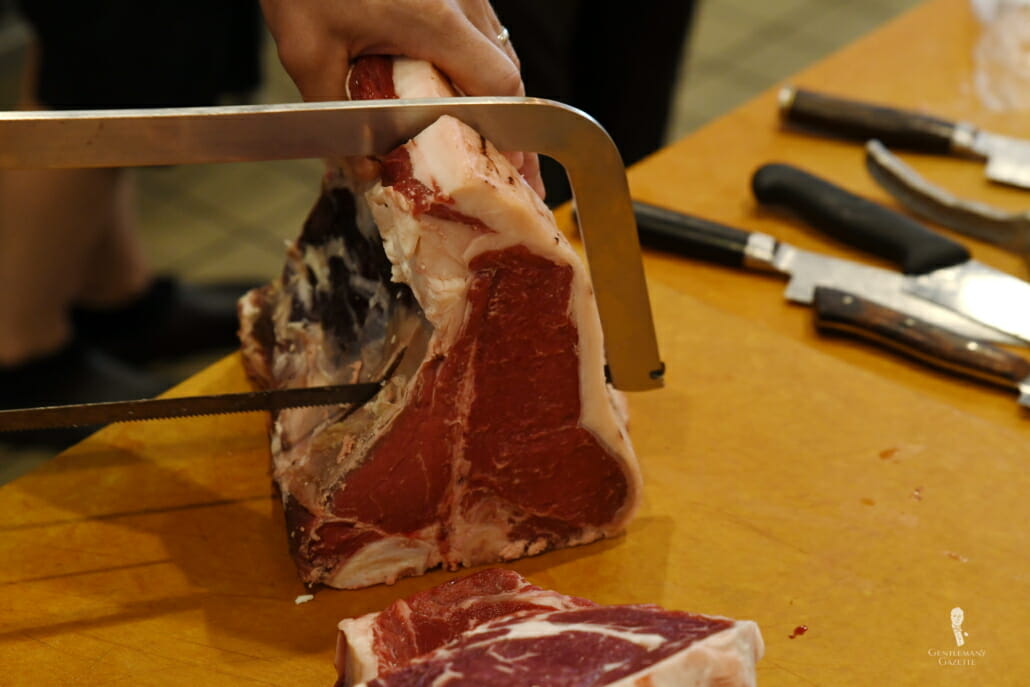 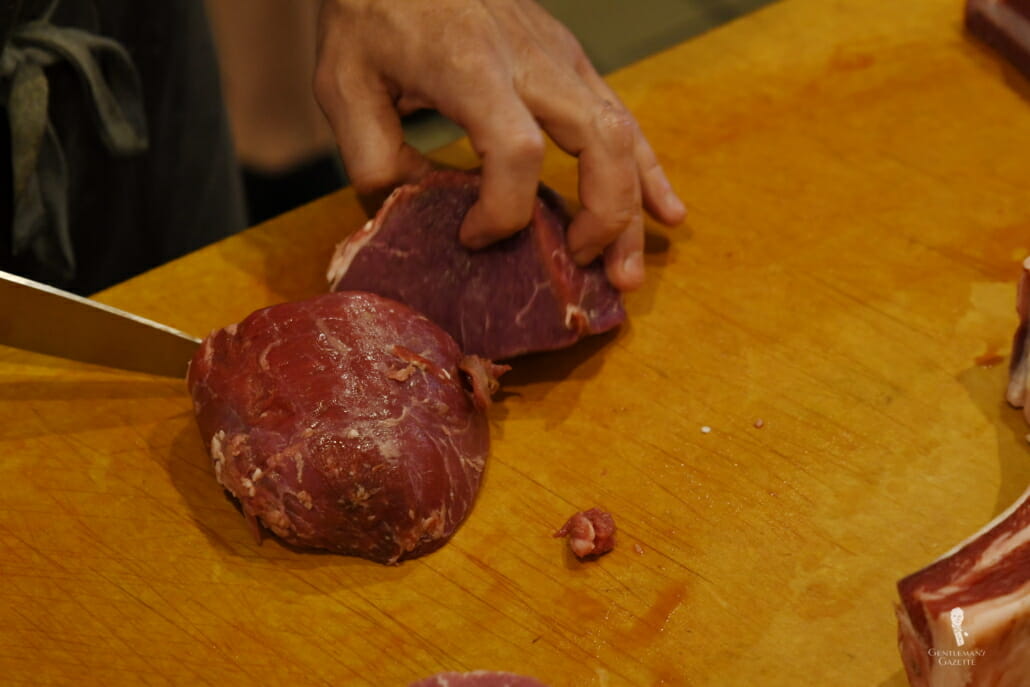 With the information we’ve laid out above, you should now be suitably familiar with the basic characteristics of a quality steak, as well as the unique attributes of our top five cuts. This is only the first part of the process to enjoying  a great steak, of course; after deciding what you want, you’ve got to go out and buy your steaks, and then cook them properly. To learn more about these two facets of the experience, consult the latter two parts of this Steak Guide: Part II covers how to buy a steak, and Part III deals with cooking and serving techniques. Bon Appétit!

How to place an order